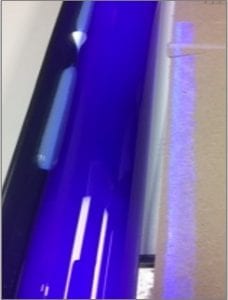 Use of black light at measurement station appears to aid in reduction of measurement error.

Start development of questions and hypothesis 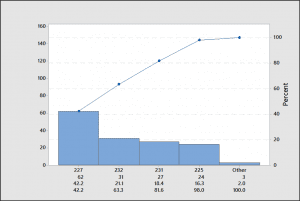 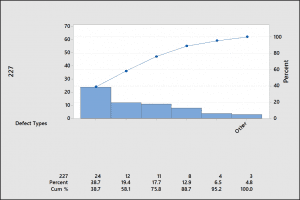 A high level project plan was prepared listing the tasks and an estimated timeline with the projected completion date set for September 2017. There are a number of conditions which may be encountered that may impact the overall timeline. Critical tasks include:

A quick C&E matrix was conducted. Two criteria were used: _____ defects at X; internal _____ related scrap. During the preparation of the C&E it was recognized that both criteria had nearly the same relationship, so only the defects at X were evaluated.

One of the Gluers has been running at ABC cartons per hour since it was relocated to Greensboro. When it was at the other plant, it was running at over DEF / hr and has an OEM nameplate capacity of XYZ / hr. 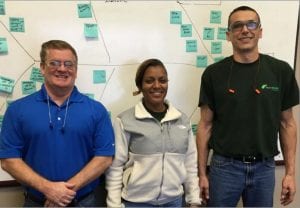 Ideal performance is calculated based upon the blank Y + 0.75″ and belt speed

Performance data is provided to the management team daily

There was a previous RCFA Kaizen on the same finishers

24 different sources of variation were identified which impact performance.

The data supports that some operators perform better than others (based upon average Performance). It also shows that each operator has considerable variation job to job. Another issue stated by the team is that crews were following Centerlines but also said that some personnel changed the settings. Finally, everyone believes there is a direct relationship between the skill of the feeder and frequency of jams. The Feeder is a critical position due to the speed of the machine. It is recommended that new feeders start on slower machines until they gain competency.

The leadership team was not aware of the existing Work Instructions for the other gluers which resulted in Work Instructions being modified. There was no record of the operators being trained, particularly for the feeder position. Therefore, a training plan was drafted. All operators will be trained on the feeder position before the end of February. Because operators modify the machines’ adjustments outside of the Centerlines, leader standard work will include periodic verification of Centerlines and feeder conformance to work instructions. 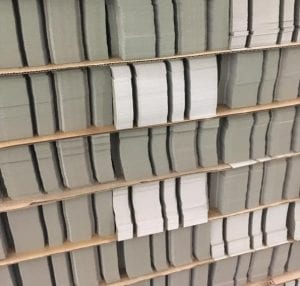 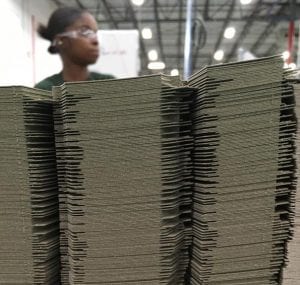 What is the Training Plan?

New feeders will receive initial training during orientation. This training will consist of watching the video and reading the Work Instructions. The on-floor training will be conducted one-on-one during operations, starting with the work instructions where the trainer will show how to feed, explain the main steps and key points, and provide reasons through several loading cycles. Then, the trainees will show how to do the work and to explain the main steps, key points, and reasons through several loading cycles.

The two lines are currently running at about 70% performance 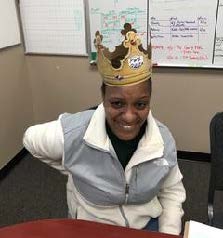 Analyze the layout of the new campus to increase the probability to satisfy the forecasted company growth and improve production performance.

With an impressive YOY growth, this company decided to develop a new campus that will allow for continued growth, improve its production process and become a showcase for its customers.

A group of critical stakeholders were asked the question, “What should be achieved with the New Campus layout to be considered successful?”. Their answers were recorded and key words were listed as the Success Factors for the exercise.

Each Success Factor was compared vs the others to estimate their relative weight during the decision-making process. Growth (Capacity), Quality, Sustainability, Cost and Flow were the most important factors to consider after Safety. 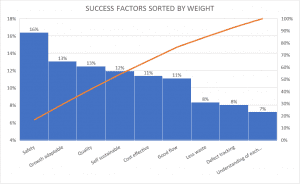 Create a graphical representation of the Current State Map (CSM). Using the new campus blueprint, CSM and the Product families, create a scale model of the manufacturing process. Gather baseline data, according to the initial plans for the new campus layout.

Create a list of Limitations, Options, Assumptions, Guidelines – brainstorm different layouts. A total of 8 layouts alternatives were created and evaluated. 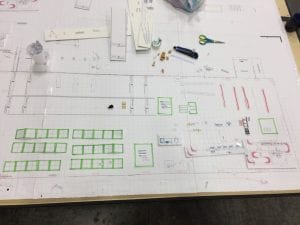 The next step was to create the best options for Single Place Flow work cells, four Mega Cell work cells and the assembly lines. The best option will be selected based on the initial criteria. Controversial perspectives were discussed and reevaluated.

Product standardization – Evaluate the possibility of de-customized some component of company’s products.

Value Stream Organizational Structure – Include Engineering, Solutions and Sales into the cross-functional teams.

Problem Statement: One of the presses has performed below expectations at an average speed of 6,900 Sheets per hour compared to a budget of 9,500 Sheets per hour. The current asset availability is < 50%. 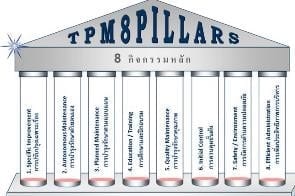 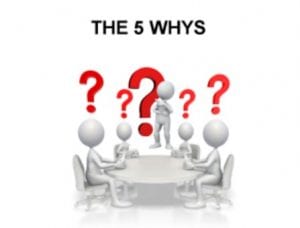 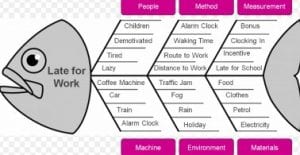 Problem Statement: Continue with SMED Certification: The plant has completed several SMED events with little sustainment. The variation in change over times is limiting the business and costing over $250M/year. The lean tools were implemented but the management system did not follow. The press struggles significantly with Make Ready’s. Make Ready times are often greater than 2 hours, while the customer demand requires the time to be less than 45 minutes. 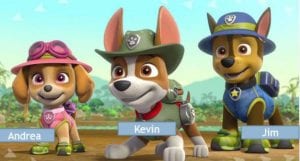 The team performed 3 Make Ready’s on the press. Seventy-five percent (75%) of the MR time was spent obtaining register, requiring 16 sets to be pulled and various adjustments. Plate changes were completed in less than 15 minutes each time. This was not a representative of the real struggle in performing a full Make Ready.

The team performed a new video analysis on the press with the emphasis on registration identifying VA versus NVA steps. The team continued to improve the standard work and performed a waste walk identifying Value adding activities in each department.

Problem Statement: There is not a consolidated summary of all of the information needed for a production run. Some data is captured on paper forms and other data is captured electronically. There could be 20 plus pages to evaluate a production run. The format of the data does not facilitate timely review and quick conclusions. There is no comprehensive review of the data and we are not learning from it.

Improve the job bag effectiveness to: 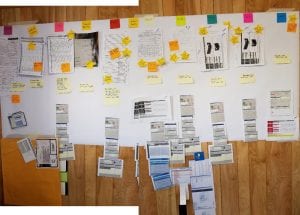 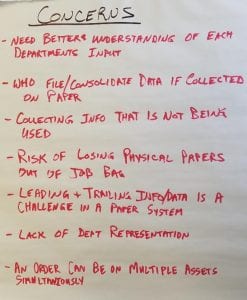 Consolidate data and information and make it immediately available for:

Problem Statement: Standard work for PR-01 was drafted during the January SMED event. Focused upon standardization of the process steps leading up to the first pull. The two pressman-feeder teams used different methods from the first pull to running at rate. This resulted in longer make-ready times and MR wastes. The historical operational data does not have sufficient granularity to quantify the amount of this difference on a long term basis. 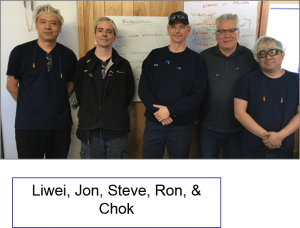 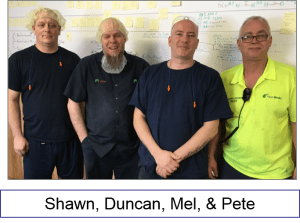 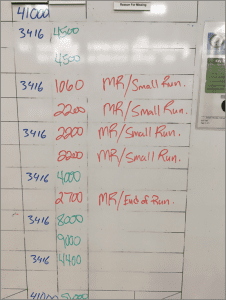 Each week this press conducts about 40 M-R’s.

What did we do?

Both teams participated in Lean introductory training which focused upon:

Additional hand tools needed to do the job efficiently were secured. Operators were provided with an additional 19mm socket, extension and drive and a new torque wrench (with extension and socket) needed for blanket cylinder. 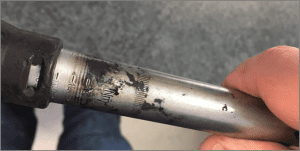 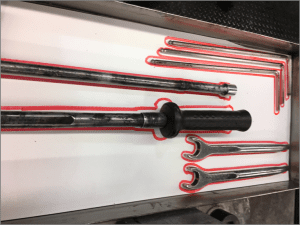 After being involved in 3P and 5S Kaizen events, Lean quickly became integrated into my daily work thought process. I wanted to be able to teach these initiatives to co-workers to empower them to take action into their own hands. Allen Industries is just like any other company, our employees are the livelihood. All of the past success is because of the intelligence and willpower the employees have towards the company to get it as far as it is today. So the real question that I asked myself, why not give the employees the tools to better the work environment?

I began my Lean Six Sigma Green Belt certification with the Guthrie Group about a year ago. During this time I took several classes which gave me all of the basic tools to understand the fundamental foundation of Lean Six Sigma. Classes are set up not only to just teach, but have you interact with the process in order to understand clearly. Almost every principle is followed up with a hands-on activity to give you an actual real life application. Something as simple as putting together a remote control car taught me more about Muda than I ever understood by going through actual Lean events. By going through this training, it made me see the waste not only on the shop floor but on my desk, in my car, in my apartment. I have always heard that an employee is blind to their own process until they are taught to take themselves out of it, because you can never see the wasteful tendencies you perform every single day. The reason is because you have never questioned your actions before so it has become your “daily routine.” This training taught me take a different approach to how I work and how I should convince others to work. Waste is everywhere; it’s a Green Belt’s job to help identify that waste and eliminate it. 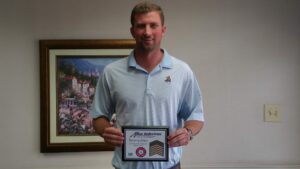 My Six Sigma Black Belt certification was much different. Ever since Allen Industries began Lean events two years ago, I had always been a huge advocate for removing waste. So it interested me to learn the Six Sigma approach, which opened up a whole new world. By reducing variation, Six Sigma is a much more methodical approach to problems.  Everything can be measured with data. This class was the vital tool that allowed interpreting and dissecting this data in so many ways. Even though there was a great deal of content, the class went at a perfect pace. In every module, there were real world examples along the way that would reinforce the content to stick in your brain. It’s a tool that everyone should get certified on in my opinion. It will be able to save money and improve output in no time. This involved several weeks of classes in which we progressed along the trail of Six Sigma projects. And along the way we were tasked to perform our own project with very helpful one-on-one session. Being a Six Sigma Black Belt means so many things. To me it was very important to be able to teach these philosophies to other personnel within my company. Being able to show them how any process can improve and give them encouragement in their job. I’m not only a much better employee, but I feel personally invested in my work which I hope I will rub off onto some of my colleagues.